Rescuing disabled cats was not something that Lauren and husband Joe had planned but they now believe that it was something they were meant to do.

Lauren’s interest in cats began at the age of 6 when she convinced her parents into adopting two rescue cats but she adopted her first handicat when she was 15. A box of kittens had been left in a pet store and Lauren set eyes on the most stunning baby Blue Russian, she begged her parents to go to the store to have a look at the kitten. When the family got back to the pet shop all but one kitten had been sold, the one that was left was the kitten Lauren had fallen in love with. She couldn’t believe it and told her parent’s that it was a sure sign.

When the store told the family the kitten was going to be put down because she was missing a leg and her bone was sticking out Lauren and her family felt absolutely devastated and took the kitten home straight away and named her Shadow.

Lauren explains that she was literally her shadow, they had her leg removed from her hip and it never slowed her down. At first Lauren’s parents couldn’t look at Shadow but soon they became obsessed with her!

In 2008 Lauren was 25 and was dancing for the NY Jets, she still had 4 of the 6 rescue cats that she had taken in over the years, including her precious Shadow. At the age of 30 she stopped dancing for the Jets and felt like something was missing from her life, she wondered what an earth to do with all of the extra time.

One day Lauren received a phone call from a hysterical friend who was freaking out, a baby kitten was stuck between her fence and the shed and her dog was trying to get at it. Lauren went to her friends and there stuck in the fence was the tiniest orange tabby, his eyes were closed and he was riddled with bugs, the poor kitten could barely move.

On the way to the shelter with the baby kitten he started passing out and Lauren thought he was dying, her first thought was that the shelter would put him down. She made a U turn and rushed to the vet, they were told that he had CH (Cerebellar Hypoplasia) and wouldn’t be able to tell how severe it was until he was 6 months old.

Instantly Lauren knew that she needed to nurture this little guy back to health and he became her Little Man. Little was on a bottle for 7 months before he learned how to chew and it only took 3 months to confirm that Little’s case was severe, this mean’t that his motor skills would be affected so simple tasks like walking and standing would be impossible but Little lives life to the fullest. 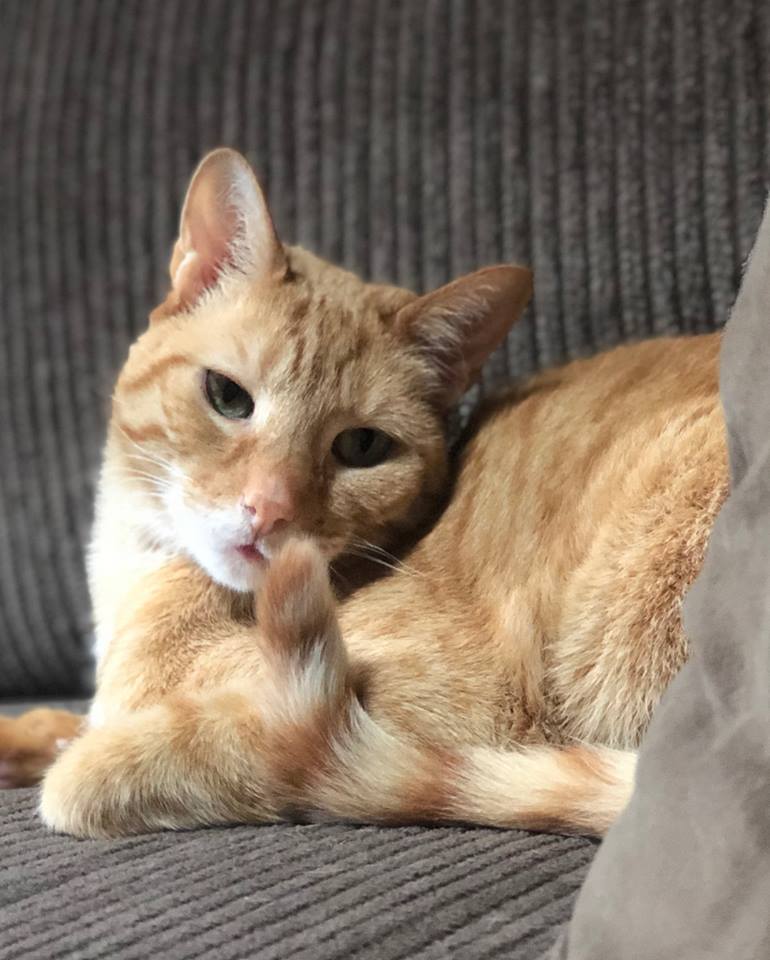 By this time Lauren had met Joe, she explains to Pawsify that Joe was terrified of cats but she could see that he did feel bad for Little. Whenever Joe invited Lauren over she told him she couldn’t leave the cat, so he agreed that she could bring him over.

Joe had no idea that bringing Little meant bringing a whole bunch of things including a tent, litter box, litter, water bowl, food and also carpet (because he had hard wood floors). His face was a picture the first time Lauren rolled up with Little and all of his essentials. Joe fell in love with Little and they even attended Little’s therapy and acupuncture sessions together. 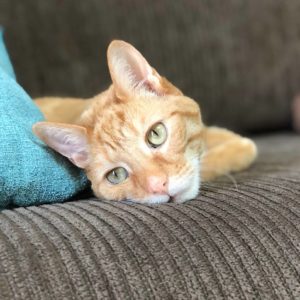 After 7 months of going out, Joe found Mika in the middle of their street, the poor kitty had no eyes. That very same day Lauren found out that she had to have her Shadow girl put down, she felt like she didn’t want another cat she just wanted her Shadow.

Joe adored Mika and the bond between the pair was special, it may have taken Lauren a few weeks but she says that Mika is perfect and she’s grateful that Mika is part of the family. 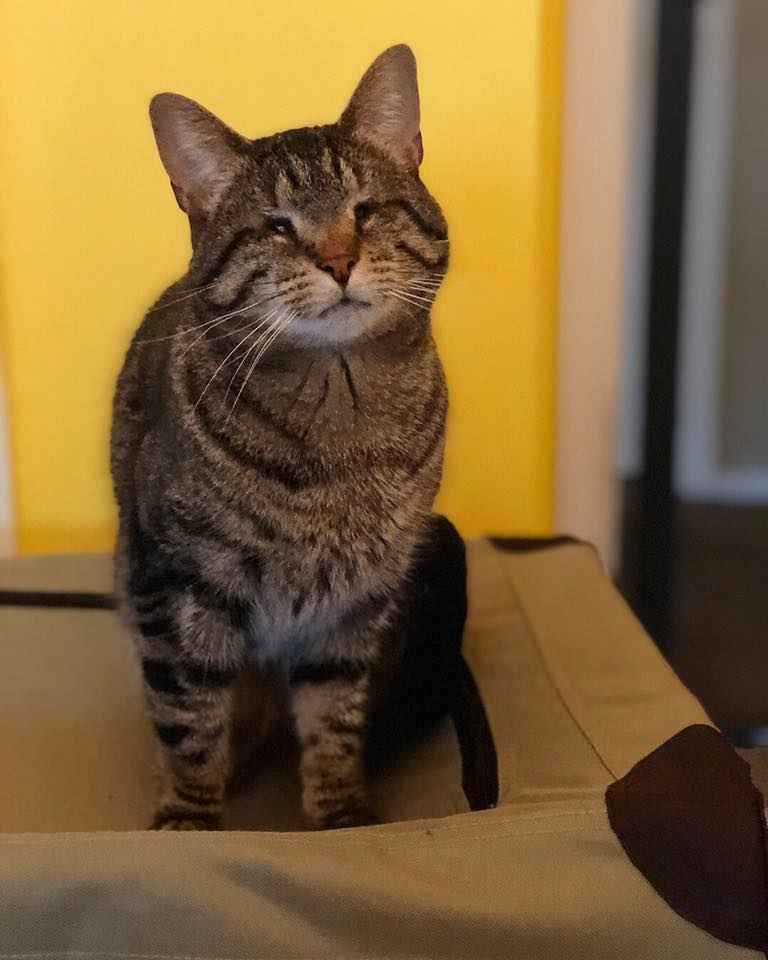 From that point their family just kept growing, the vet recommended they get a friend for Mika since Little goes to work with Lauren, Mika was lonely during the day.

They were supposed to adopt 2 handicats over the course of 4 months but unfortunately both fell through. Lauren felt that this was a sign and told Joe that it wasn’t meant to be and she was giving up looking for another cat for a while.

The same day the pair were visiting NJ they got a phone call about Mac who happened to also be in NJ, he has been overlooked in the shelter for 8 months because people thought he was ugly. The pair adopted Mac but they didn’t realise what was in store when it came to his health conditions. 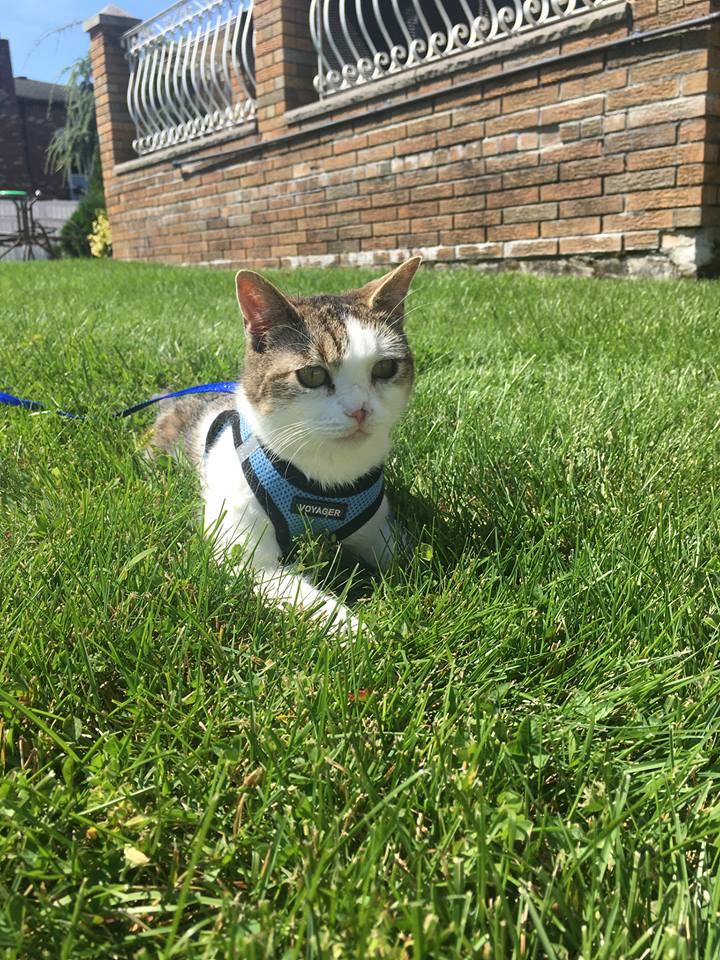 Lauren tells Pawsify “It was absolute chaos between finding out he had asthma, cleft palette, half a nostril for airway, a heart condition called cardiomyopathy, eye herpes, chronic sinus infections, Megaesophagus and more!
What we have done for Mac I would do over a hundred times. He is our greatest gift. He is inspiring and has forever changed us. We have spent countless nights at vets learning along the way what works and does not work for him. Constant medications, funding, humidifier sessions, oxygen tanks, etc…”.

The amount of times the pair were told that Mac wouldn’t make it were insane, yet he has just celebrated his 2nd birthday.

After a year of adopting Mac they went to drop off some donations at the shelter when they were told about a rescue cat who reminded them of a girl version on Mac, she was overlooked for 5 years because she was missing an eye.

They named her Leela and Joe fell in love with her. Lauren couldn’t believe that once Joe had been terrified of cats and wouldn’t go near them was now falling in love with handicapped cats and claimed he would NEVER have more than 2 cats. 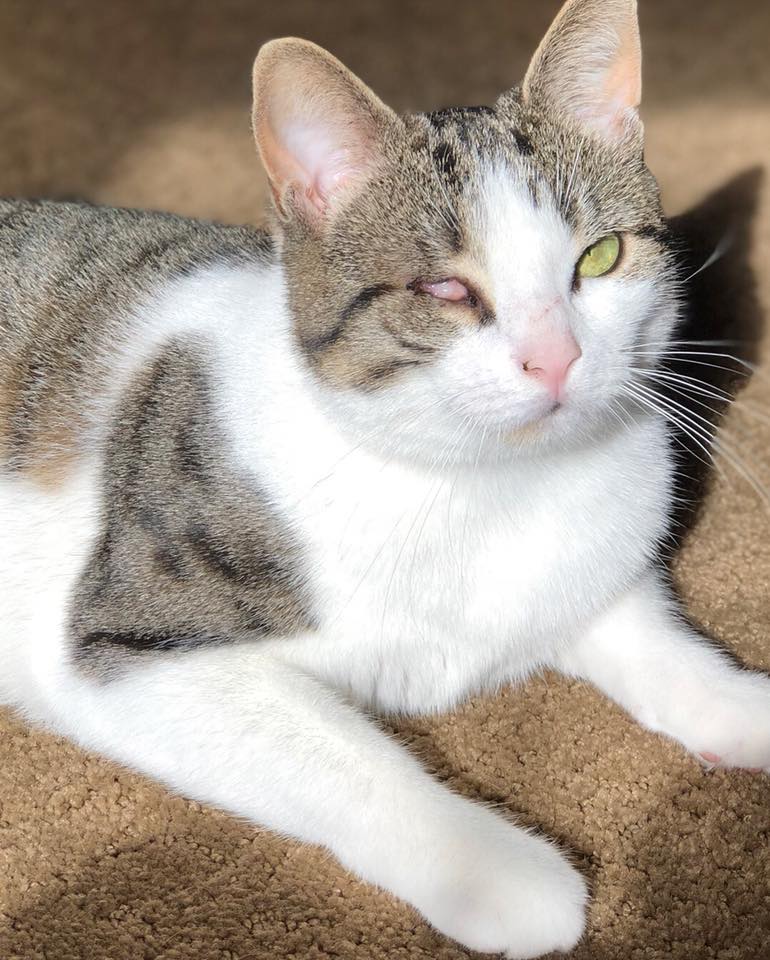 After 2 months of adopting Leela they received a call about a munchkin cat in someones yard, they had been feeding him leftovers but realised that he wasn’t growing. It was the day of a major snowstorm and Lauren was worried that he wouldn’t survive so she decided to just foster him, but soon she realised that he reminded her of Shadow Girl and he was this missing link that would complete the family that is Tank.

You can also help towards the vet bills donating via paypal.me/handicats