Sue Drummond and her little Maltese-Shih Tzu mix Bibi were walking along the pier in Melbourne, Australia when suddenly a huge gust of wind blew Bibi right into waters below.

Sue watched helplessly and began to panic as Bibi struggled to battle against the ferocious waters and it looked as though she was about to loose her little dog. 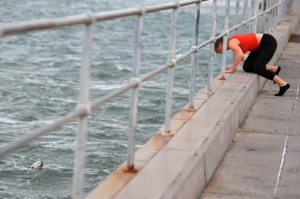 Suddenly, a man called Raden Soemawinata stripped down to just his underwear and shirt and had no second thoughts about jumping into the waters to save the dog.

“It was pretty cold and windy but it wasn’t such a hard decision to jump in,” he told Australia’s Daily Telegraph“It wasn’t such a great feat. I’m a part-time model, so getting into my jocks isn’t so different to what I do for work.”

Raden was attending a family ceremony on the pier to scatter his grandmother’s ashes when he noticed the pup in distress.